How much should be in a medical history? What details are relevant? What aren’t? Should it be done by age? Or by symptom? There are many ways to create a medical history. Here are some ideas.

When I first started out writing up a medical history for my daughter, I began with the family background, conditions I had and medications I took while pregnant with her, and what happened during birth. Then I proceeded with problems she had as an infant, then at one, then at two…. When I was done, I realized that some problems repeated each year, and some had vanished from the list.

I then approached it a different way. I wrote it up by symptom, or cluster of symptoms, age they appeared, and then what happened to those symptoms. I put it into a table form (using an Excel spreadsheet). This method was much more revealing. I found that as time went on, we would think of more to put into it, since I was doing it looking back over a couple decades. It might have been much easier if we had started this method sooner.

Combined with a current medication list (more on this in the book) and medication history, the medical history by symptom cluster was the most concise method I came up with—one that is not as overwhelming as the simple chronological list, and much more informative at a glance. If the doctor wanted to look at, for instance, migraines, she could quickly see what helped and what didn’t, possibly gaining more insight into the underlying pathophysiology of other symptoms.

The headings along the top (see table below) are:

Here is a sample of such a method—for privacy reasons, this is NOT taken from my own daughter’s actual medical history. In addition, since this is just an example, it is not nearly as detailed as the actual one we have for my daughter. Hers is about 12 pages long in landscape format. Is that too long? Well, I have had doctors appreciative of the detail, and others that had the opinion that it is too long and no doctor would read it.

When looking at a medical mystery, however, I am convinced that including every symptom and symptom cluster is critical. How can we know what is relevant and what is not? That’s why you are seeking specialists.

An example of a symptom that made me into a believer of including all symptoms is something as seemingly insignificant as an intermittent bowel problem since toddlerhood. It turned out to be immensely intertwined with a later diagnosis of osteoporosis which resulted from an intestinal malabsorption problem!

So I suggest you keep a detailed summary if only for your own sake—to keep track of how much things have improved, and how much is still left to go. No symptom will be overlooked, and you can always do another quick summary of symptoms left to be addressed. 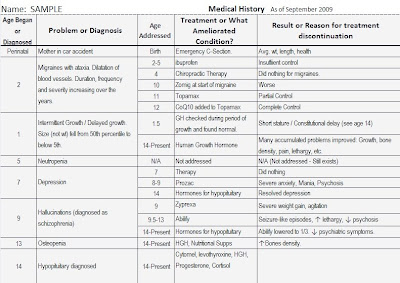 Listen to Author on Edin Road Radio! -- Part 1 Part 2
Follow Author Page on FACEBOOK:
* Be sure to "LIKE" Author Page!
Upcoming Medical Conferences & Webinars:
* GPL Wed. Night Webinars
The Book: " It's not Mental "

Do you know someone with any or all of the following?
* sleep problems
* mood swings
* anxiety
* hallucinations
* migraines
* allergies
* body pain
It is time to think outside the box and obtain meaningful HELP. Want to read about how another family successfully and lovingly helped their loved ones? Want to know about service dogs, genetics, testing, supplements, school, legal matters, etc. dealt with by another family?

Every person with any of these issues in the family tree, or any disorder for which the doctors don't know a medical cause for strange symptoms, should read this book! (Read more about this book here)
Critical information in an easy-to-read, enthralling story format with sidebars, charts, diagrams, footnotes, annotated references, and appendices.

Article:
Gluten Sensitivity and the Impact on the Brain

Video: What is Functional Medicine?


See: Bipolar and Off Her Meds for an inspiring story.

The author of this website can be contacted directly by sending an e-mail to: Jeanie@ItsNotMental.com
* * * * *
If this site has been helpful to you, please consider a donation.
DISCLAIMER: We are just regular people blogging and commenting here. We are just sharing our OWN experiences. Therefore, nothing on this site is to be taken as medical or legal advice! Do not start, stop, or change medications, supplements, exercise programs, diet, sleep regimens, etc. without consulting a doctor.